The 1500 Project on 6th Street in Harrisburg is an “urban infill” project that will be a vital part of the revitalization plans for an area of the city that has lots of buildings that are in need of rehab and repair. The Project is located directly across the street from the proposed Federal Courthouse Building. With no certain date for the start and completion of the Courthouse Building, the owner has taken it on himself in the meantime to start the revitalization of this area of Harrisburg. This building is also unique because it is a condo building, not an apartment building, like most of the other buildings in this part of Harrisburg. 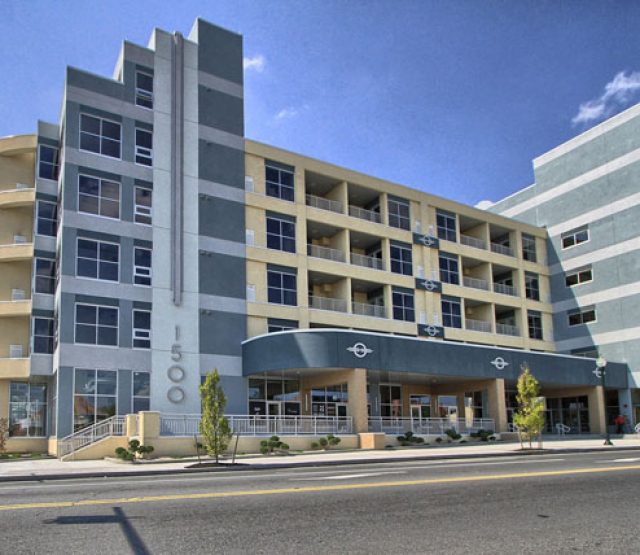 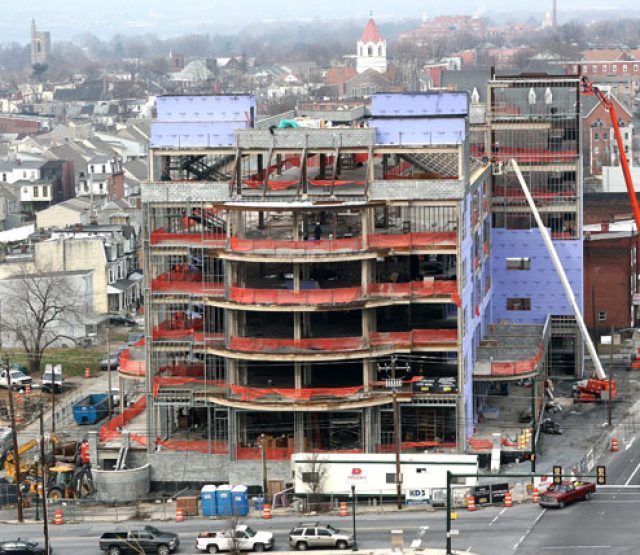 Because the Project site was an “urban infill”, meaning that the building was being built around the existing streets and building, there were some unusual challenges. The site itself was very tight and allowed very little space for material delivery, placement of power lifts and setup area for the cranes. In addition, there were power lines that remained “live” throughout the construction process. This created an unusual safety hazard that we typically don’t need to deal with. With all the cranes and power lifts that were needed, Smucker Company’s workers had to constantly monitor the movement of the extended arms on the lifts and cranes to make sure we didn’t hit the power lines and get electrocuted. Smucker Company’s Safety Director, Project Manager and Foreman all took an active role in making sure the workers remained safe.

This installation part of the project was also very challenging. The stairwell section of the building had “clear span” exterior walls that exceeded 130’ above ground level. To access these walls, we needed to use 135’ boom lifts to allow the workers access to the top of these walls. Most of the remainder of the building had exterior walls that were approximately 80’ above ground level. For these areas, we needed to use numerous 100’ boom lifts to allow the workers access to frame the walls. With the tight site and the ever present “live” power lines, the extended arms and buckets on these tall lifts created a constant hazard for the workers to be aware of. 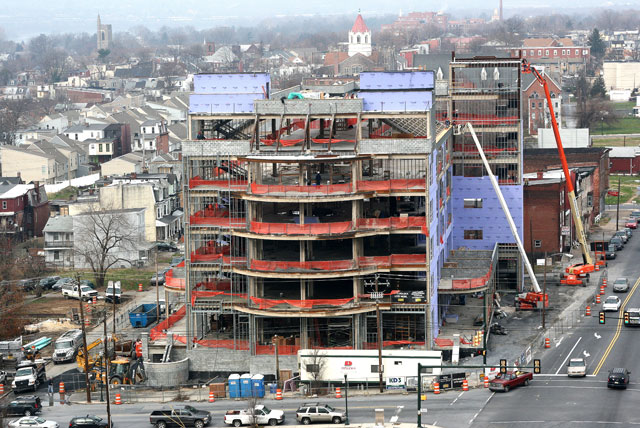 The 7th floor of the building includes some condo units that have lofts with an open ceiling to the top floor. The exterior framing of these units consisted of an interior wall with heavy gauge studs on the 7th floor that also extended up into the top floor and became an exterior wall on the roof. This unusual condition was engineered and designed by our professional engineers to serve both as a final interior wall that received drywall and an exterior wall that had to be weather tight to the outside of the building.

These loft areas also created an area of the building where Smucker Company workers used metal stud framing to frame a roof structure that supported a standing seam roof and an enclosed gutter system.

With the many hazards of the site and many unusual framing conditions and details, Smucker Company is proud to say that the project was safe and profitable. It is gratifying to be a part of what could be the start of a complete revitalization of an entire area in the city of Harrisburg.