Kinsley Construction was hired by the Owner and the Architect to take an old 1970’s structure and transform the building into a modern-day corporate office building for one of the largest tech companies in the region.  And they needed to do it with a very aggressive schedule that at the beginning of the Project did not seem possible.  Smucker Company was contracted by Kinsley to install the metal studs, drywall and acoustical products for the Project.

The scope of work that Smucker Company was hired for is all critical path work, meaning that other trades on the Project cannot proceed with their work until we complete our portion of the work.  The mechanical, electrical and plumbing trades cannot proceed with their “rough-ins” until the metal stud walls are installed.  And with the aggressive schedule that the entire construction team agreed to hit, it was critical that all the different trades coordinated schedules and collaborated on daily construction challenges that are inherent for a design-build, renovation Project. 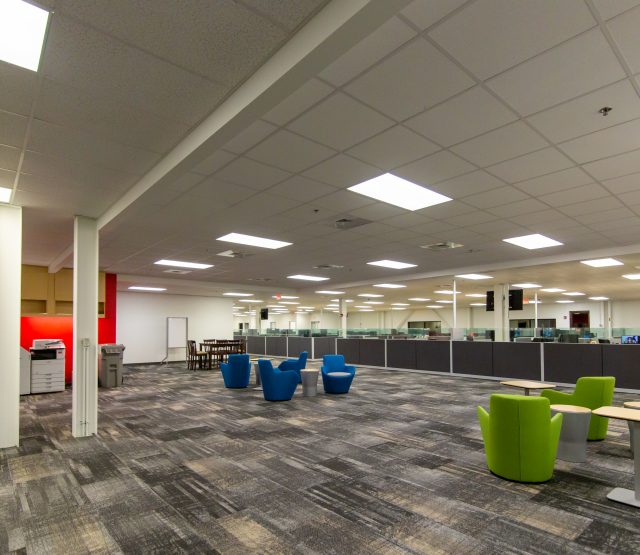 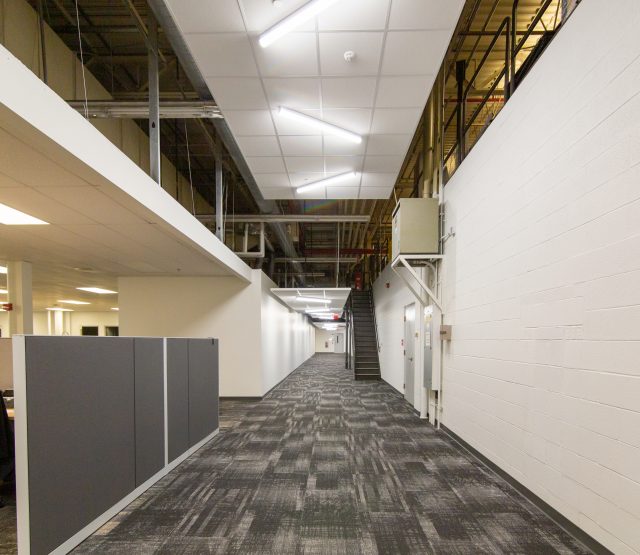 Kinsley and the Architect recognized this from the beginning and implemented the Last Planner – Pull Planning process to help all the trades with the schedule coordination that was necessary to pull off the aggressive schedule. What was especially refreshing for Smucker Company was the fact that the mechanical, electrical and plumbing trades were all union contractors and we were able to create a great team atmosphere on the Project regardless of the fact that we were working side by side as union and non-union contractors.

Smucker Company also has an advantage on Projects with aggressive schedules because we self-perform our work. We have 200+ in-house employees that are equipped and trained to be a part of a team that strives to help our customers complete projects on-time and on-budget. Having the buy-in from Smucker Company employees, rather than having to count on subcontractors, was a significant factor in getting this job completed on-time and being able to work side by side with union contractors and union workers.

Another key factor to hitting the aggressive schedule was the availability of the Architect to answer questions immediately. The Architect was on-site weekly and sometimes daily to work directly with the different trades and keep the fast-paced Project moving. The Smucker Company team from the beginning of the Project were able to deal directly with the architect and get answers very quickly, sometimes the same day. He commented to our team that he loved working with Smucker Company and the “get it done” attitude that we have. This also was a key factor in getting the Shop Drawings and Submittals approved very quickly. Again, this was very refreshing because the progress on the Project was not slowed waiting for answers from the Owner.

This relationship with the Architect led to a significant cost and time savings Value Engineering idea that Smucker Company initiated. Rather than use expensive 4” Axiom trim for the borders of the acoustical ceiling clouds, we proposed using a 2” wall molding. The 2” wall molding is readily available and is a lot less expensive. The 4” Axiom can sometimes have significant lead times. So, rather than take the chance of waiting for material, Smucker Company proposed the change or product along with significant dollar savings and a guarantee that the material would be available when we needed it. The deduct change order was approved and the approval played a key role in completing the Project on-time and on-budget.

In addition to dealing with the aggressive schedule, the scope of work for Smucker Company included some very challenging products and designs. The acoustical clouds in the Corridors and Gaming area are an example of this. The acoustical clouds were built on the floor as one large cloud and then hoisted into place and suspended from the ceiling with aircraft cable. This process by itself was not too difficult, however, the clouds were in many different shapes and sizes and were hung at different heights and slopes. Also, it was difficult for the Owner and Architect to know exactly how the clouds would look and the best placement of them until they were in place. This meant that the final placement was achieved by “trial and error”, and therefore we moved the clouds numerous times to get to the desired look/design. In the end, the acoustical clouds look spectacular and added great acoustics and aesthetics to the Corridors and Gaming Area.

The metal stud, drywall and acoustical ceiling installation was somewhat typical, except for the size of the building and the massive amount of work that had to be completed in such a short schedule window. Because of the open office floor plan, the majority of the metal stud/drywall walls had to be framed, hung and finished to the exposed deck. This adds a lot of extra labor and consequently requires a lot more manpower because of working off lifts and scaffolding to complete the walls.

In the Lobby area, there is lots of detailed metal stud framing and drywall work around the area that is open to the 2nd floor. We installed detailed drywall soffits, skylights, GRG columns, barriers at the turnstiles and framed the seating area for the amphitheater. The finished product creates a grand entry to the renovated building.

Over the amphitheater there is a wood slat ceiling that was installed by Smucker Company. We have installed many of these types of ceilings in the past and we had planned for it to be a typical installation process. Except, when the material showed up there was major deficiencies in the manufacturing process. Each wood slat hangs vertically and attaches to a carrying channel with “notches” cut into the wood slat so that it simply loops over the carrying channel at an exact location. In this case, the “notches” in the wood slats were all in the wrong location. After many conversations with the manufacturer, Smucker Company decided to modify each wood slat and cut all the “notches” at the correct place that was needed for the proper installation. Because of the aggressive schedule, we did not have time to wait for the corrected wood slat material to be manufactured and delivered to the jobsite. The Smucker Company installers did a phenomenal job with the custom cutting of each wood slat and the result is a wood ceiling that looks fantastic!

One final hurdle was overcome at the 11th hour of the Project. With the opening of the building two weeks away, we were all set to complete the final punchlist. But the Owner decided to add a sliding board that goes from the 2nd floor of the Lobby to the 1st floor of the Lobby. This meant they were cutting a hole in the floor right in the area where we add previously installed detailed drywall soffits. After they cut the hole, we had to install metal stud framing and drywall to make it all look great again. The entire team pulled it off and they opened the Office Building on schedule.

Smucker Company got great satisfaction from this Project. There were lots of ongoing challenges that our team had to solve. We enjoyed being an active part of the schedule planning and the design process. It is very rewarding to complete a project on-time and on-budget, especially when you have done it while overcoming many, many challenges that could have derailed the completion of the Project.