The Marriott at Penn Square Addition started with the demolition of multiple rowhomes to create the space needed for the new 12-story addition that would be a great addition to the Lancaster city skyline. The demolition of the homes is significant because it starts to tell the story of what was one of the biggest challenges of this project. Because the 12-story addition was built between two existing buildings, there was constant and ongoing challenges with access to the project site, street closures for delivery of materials, tight work areas that were “in and around” the existing buildings and other logistics that had to be coordinated between the General Contractor, Owner and other Subcontractors working on the Project. 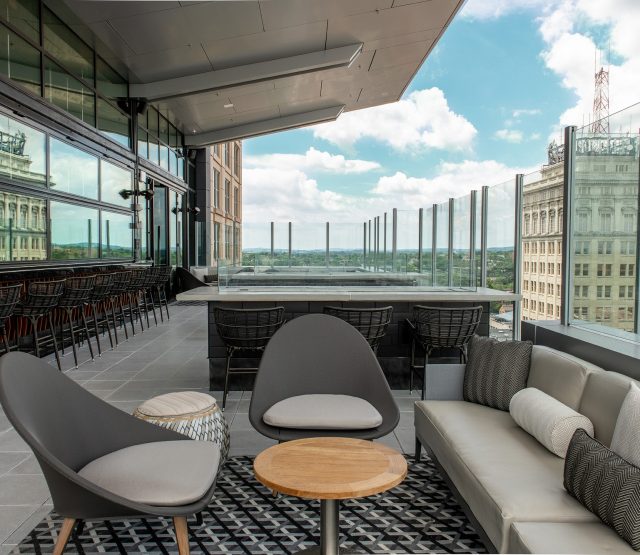 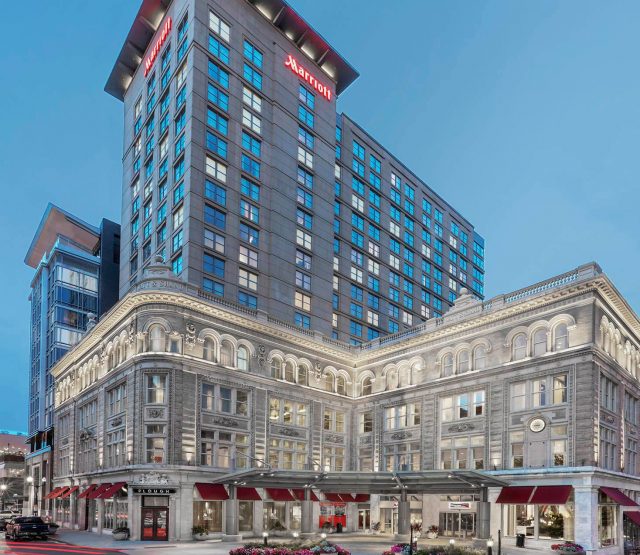 Smucker Company’s scope of work included the cold formed metal stud framing for the entire exterior wall of the building. Because of the tight work area, the metal framing portion of the work was done from the inside of the building. This meant that Smucker Company’s workers had to perform the work while being positioned right as the edge of the building and had to reach out from the inside of the building to attach the fasteners needed where the metal stud wall connects to the steel structure of the building. If not done properly and by following all safety guidelines and protocols, this could have been a potential safety hazard with grave consequences if something went wrong. Smucker Company’s Safety Director collaborated with the team from High Construction and our Risk Management experts from the insurance company to ensure the safety of our workers. Our workers used harnesses and retractable fall protection equipment to tie off to anchor points in the concrete floor. This equipment and the connections met all OSHA requirements and guidelines and were checked multiple times throughout the day by our workers, the Foreman on the job and our Safety Director.

There was cold formed metal framing needed for attachment of the metal panels that would be installed above the rooftop bar/restaurant. This structure cantilevers out from the building to create an appearance of “floating” in mid-air and allows for an unobstructed view of the city of Lancaster for the people that are dining at the rooftop bar/restaurant. Smucker Company needed to use a 180’ boom lift to access this area. The boom lift has a small bucket style cage that the worker is positioned in while doing his work. He uses a harness and ties off to the cage which is attached to the boom lift. The worker also need to be extremely careful when handling his tool because if he drops a tool or piece of material it is literally dropping 180‘ to the street surface. Because of the height of the boom lift, it needed a large area of space to set up at the street level. This required Smucker Company to work with High Construction and the City of Lancaster to plan street closures while this boom was being used. Also, if it was too windy, the boom could not be used because it was too dangerous and an unsafe situation for the workers. The Smucker Company workers who completed this portion of the work are commended for working safely under these very demanding and unusual circumstances.

There was a small area of the roof section that we could not reach with the 180’ boom lift because it was tucked back into the side of the building. The only way to access that area was to again come up with a plan to securely tie off our workers to anchor points on the building structure. As we did for the exterior wall installation, our Safety Director collaborated with the team from High Construction and the Risk Management experts from our insurance company to ensure the safety of our workers. Our workers used harnesses and retractable fall protection equipment to tie off to the anchor points. This equipment and the connections met all OSHA requirements and guidelines and were checked multiple times throughout the day by our workers, the Foreman on the job and our Safety Director.

The wind also was a factor for the hydro mobile lifts that were to access the entire face of the 12-story building. There were numerous days when the wind would shut down that portion of our work. This had the potential to create schedule issues because the work still needed to get completed in a timely manner, yet Smucker obviously had no control over the weather. In spite of missing numerous days, Smucker Company still completed the work on time so that the next trade could do their work on schedule.

The exterior framing that Smucker Company installed was used to support Taktl Concrete Wall Panels. These panels had little to no tolerance for deviations in the cold formed metal stud framing that thew were being attached to. This created significant challenges for our Engineer and pre-construction team. It would be very difficult for the design to be done in a way that would allow for zero tolerance. There are too many variables with the steel structure that was being used as the attachment point for our metal studs. Through lots of coordination between our Engineer, the structural Engineer, and the Metal Panel manufacturer, a solution was created that allowed for an acceptable installation tolerance that we could confidently say that that our workers could meet when installing the cold formed metal stud framing. In the end, the installation was completed so that the metal panels could be installed properly, therefore making for a beautiful exterior wall façade.

Even though the Smucker Company team faced challenges and logistics on this Project, some of which we had not seen and dealt with before, our team was able to collaborate and work with others to create solutions for completing our portion of the project. Smucker Company prides itself in taking on very challenging projects and is typically able to complete those projects on time and on budget. This project was no exception…our work was completed on time and on budget and we are grateful for the learning experience that we gained from completing this very challenging Project.