Messiah College worked with High Construction and Greenfield Architects to create a Performing Arts Center that is second to none in the Central PA area. Considering that the design was a work in progress, the project was ever evolving and this created many, many challenges and changes during construction. High and Greenfield allowed Smucker Company’s Foreman, Dave Ross to be an integral part of this design-build process. We are thankful for this provision, because with the involvement of Dave Ross, our portion of the project was able to move quicker than it might have otherwise.

Because of the complexity of our metal framing work and the importance of getting all the other trades work integrated with the metal stud framing, Dave Ross was also involved greatly in the coordination with all the other trades, particularly the Mechanical, Electrical, Plumbing and Acoustical design work. Because of Dave’s involvement, High relied on Smucker to drive the project and we were often the main cog in the schedule. This meant that we needed to hit our schedules at all times because we were so involved in creating the schedules. 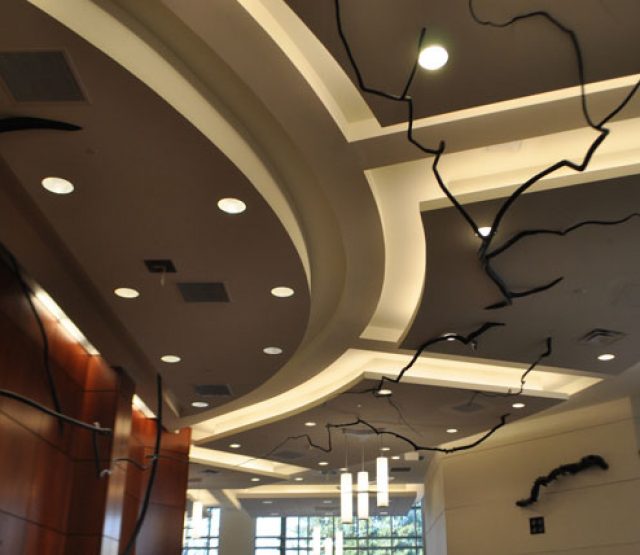 The feature areas of this building are mostly three areas: the Auditorium, the Recital Hall and the Corridors that surrounds and leads into these two rooms.

Everything that was installed in the Auditorium was done with the acoustics of the room as the main concern. On many occasions, we consulted with the Acoustic Engineer and were asked to build things that seemed unnecessary using normal construction practice as a guide. But we learned that creating an incredible acoustical experience was more important than our normal construction ideas that would possibly save some money. We learned patience as we worked through these many details with the architect and the acoustical engineer.

In the Recital Hall, construction was also done with the goal to create an incredible acoustical experience. In this room, we installed suspended GRG acoustical clouds, diffusers and grids. These were suspended with isolation hangers and aircraft cable because the normal 9 gauge hanger wire would create too much potential for vibration. There were acoustical wall panels installed at just the perfect locations to achieve optimal acoustical performance. In addition, there was metal framing, drywall and acoustical ceilings in this room.

The corridors that wind through the building have the most complex drywall and framing work in the building. The ceilings consist of a combination of suspended drywall ceilings, drywall soffits and acoustical ceilings areas that are accented with “branches” to create an incredible, visually appealing area. The walls in the corridors are all framed with metal studs and then covered with drywall or wood. In the drywall areas, there are over 11,000 lf of reveal beads that add to the design and beauty of the corridor walls.

There are some other innovative features of Smucker Company’s work. The entire project was hung with XP moisture resistant drywall to allow for protection against mold intrusion at any point in the future. Agri-Marketing was called in to remove the drywall scraps so that they could be recycled and used in the agriculture industry rather than end up in a land fill. Smucker Company volunteered for an OSHA non-citation safety inspection. We are one of only a few companies that volunteered for this program in Central PA during 2012. There were many opportunities for supervision on this project. Smucker Company took this as an opportunity to train two supervisors to work with Dave Ross and supervise small areas of the Project. All of the GRG products were designed, engineered and manufactured offsite and shipped to the site for installation. This allowed the work on these products to not interfere with the work that was happening onsite.

In conclusion, this Project is one of the most amazing projects that Smucker Company has ever been a part of. With all the moving parts of this project, we are proud to report that we performed all the work safely, on time and made a profit. We thank High Construction and Messiah College for the opportunity to be a part of this Project.