York College wanted to update the décor and appearance of their outdated cafeteria. They chose Kinsley Construction to assemble a project team that could work together during a very tight schedule window. The Kinsley Construction Team contacted Smucker Company and asked us to be a part of the team even without our price being finalized. The mutual trust between Kinsley Construction and Smucker Company is one of the reasons this project is special. In this age of construction, it is not that usual anymore to have a project that is truly design build and therefore a collaborative effort between the Owner, Architect, GC and the trades. 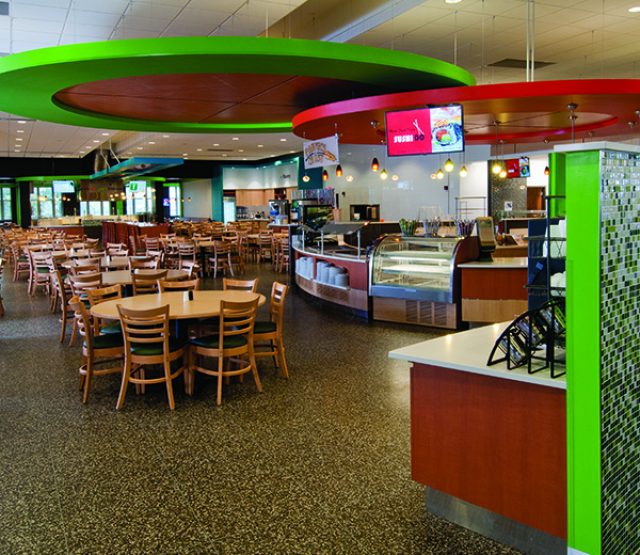 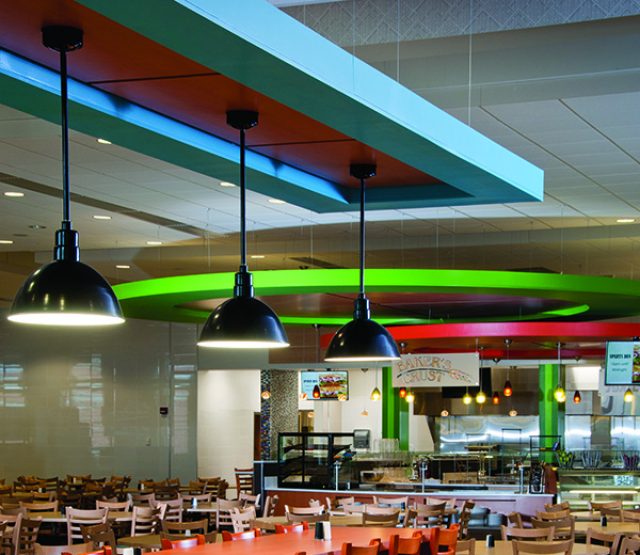 The advantages of the mutual trust between Kinsley Construction and Smucker Company played out in numerous ways during the project. As mentioned before, because of the tight schedule window, we were able to get started on the project without having a final price in place. Kinsley also allowed us to be an active part in the coordination among all the trades working on the project. On a project with a tight schedule window, this is very helpful to all parties because it ensures that no days are wasted waiting on the trades to get their act together. At a point towards the end of the project, the mutual trust was needed again because York College and Kinsley decided to change architectural firms. Typically, this would create lots of misunderstanding among the trades and Kinsley, but Smucker, along with the other trades, trusted Kinsley to manage the change and still allow us enough of time to complete our work within the tight schedule window.

Smucker Company’s Foreman, George Green, was an active part of the project team and helped with the layout and design of our work. The most significant area for this layout and design was with the construction of the ceiling clouds. The construction of the ceiling clouds included a lot of bent metal Axiom trim. And to complicate the ceiling clouds even more, some of them were also circular, which meant we needed radius Axiom trim. Because this is a long lead time item, we needed to order the material before we knew exactly what the design would be for each individual ceiling cloud. The fact that Kinsley allowed George Green to be an active part of the design team gave us great confidence that the material we were ordering would be correct.

The ceiling clouds consisted of circular clouds, rectangular clouds and, at the pizza oven, a half moon cloud. Each cloud had its own unique design and placement in the ceiling area. In one case, with only about two weeks remaining in the overall schedule, the placement of the clouds changed after we had the cloud installed. The end result was that we actually had to move the cloud about 6 inches so that it worked with the existing ceiling soffits.

All the clouds were constructed using metal studs, drywall and the bent metal Axiom trim for the outside corners. The Axiom trim extends up the face of the cloud so that the open area above the cloud is hidden from view. The metal studs create the substrate of the cloud and the drywall is attached to the metal studs and butts into the Axiom trim. The joint between the Axiom trim and the drywall then needed to be taped, spackled and sanded ready for paint. This is significant because often times it is difficult to get a nice finish when joining two different materials because there are challenges with the different materials not always matching up perfectly. These installation and finishing challenges were magnified at this project because some of the ceiling clouds were circular, which created a curved condition and even more challenging match-up issues.

We constructed the clouds on the floor and then hoisted them in place in one piece with a power lift. Once they were attached and in place it was not possible to get access above the clouds. This meant that all the mechanical and acoustical ceiling work had to be completed before we hoisted the clouds in place. At the Pizza Oven, the half moon cloud could not be installed until the Pizza Oven was in place and then we had to work over and around the oven. George Green had an active role in the coordination and sequencing of all of this work.

This was a very satisfying project for Smucker Company to be involved with. We feel privileged to have been the “contractor of choice” for the Kinsley Construction Team. It is very gratifying to know that the efforts that our team put towards providing excellence in Safety, Productivity and Quality are noticed by our customer and we then are given the opportunity to work on a special project like York College Student Union Renovation.