The York Country Day School project is special because our team helped build a beautiful building with incredible detail and unusual design features. It was fun to be a part of this project because we got to use products that are not typically seen in a common, ordinary building. York Country Day and York College wanted a building that would “stand out” in the community and draw students to the school. They accomplished this not only with the beautiful features and craftmanship, but also with the design of the building and the many unique spaces that are present in the building. This building, with the auditorium, the labs and classrooms, the tiered seating area, the school store and the café, is a wonderful addition to the school campus. 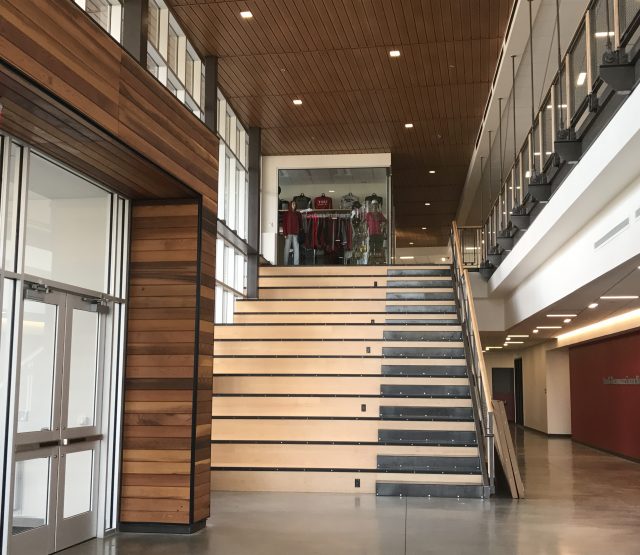 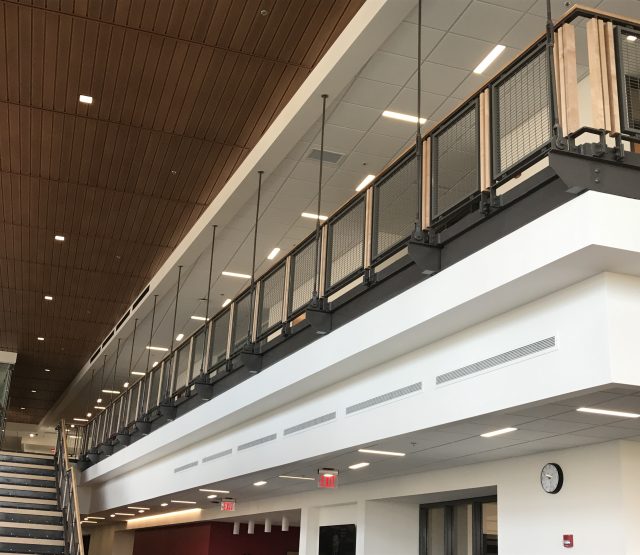 One of my favorite areas of the building is the lobby with the high ceilings, the large windows that create lots of natural lighting, the café and the raised seating area. Smucker workers installed a lot of the feature products in this lobby. The linear metal ceiling is installed inside the lobby and on the outside of the building adjacent to the lobby. We matched up the ceiling layout so that as you look through the large curtain wall windows, it gives the appearance of the ceiling being one continuous ceiling, when it is in fact broken up by the window curtain wall.

Another very cool space in this lobby is the multi-use raised tier seating. This seating is used for the kids to wait in the morning before the opening bell or after school waiting for parent’s pickup. Used like this, it becomes a hangout/study area. It can also be used for a lecture area, somewhat of a mini auditorium. The metal stud framing that created the actual tiers in this area were not in our original scope. The work was added very late in the project, which required us to quickly get our engineers to design the layout and products to be used. We also had to add extra manpower to complete this work along with the work that was already under contract.

Also lining this entire open area in the lobby are drywall soffits that create the separation between the linear metal ceiling and the acoustical ceiling in the 2nd floor corridor. These soffits were built before there was a permanent railing for the 2nd floor corridor, so extra care had to be taken to work safely. A combination of scaffolding and platform lifts were used to make sure that our workers were safe at all times. The finished drywall soffit adds to the beautiful ascetics in the lobby.

One big challenge we faced on this project was somewhat self-induced. The FRP for all the bathrooms was in our scope. After installing the FRP the first time, we discovered that it was delaminating from the wall. We removed all the FRP, rechecked the installation procedures, got a shipment of new FRP and reinstalled it the 2nd time. Once again, after a few days it started to delaminate from the wall. We removed all the FRP again and now realized we had a defective product in the specs. After working the details through with our supplier and the architect, we got a compatible, but different product approved and then installed the FRP for the 3rd time. The 3rd time was the charm and the FRP stayed on the wall and the installation was successful.

This entire process with the FRP rework was very stressful for the GC and the Owner because of the impact it was having on their schedule. Because of the way our team stood behind our work and insisted on the quality of the finished product, we were able to keep them happy and in the end they received a better product then what was originally called for in the specs. And we, along with our supplier, absorbed all the costs of the rework and additional manpower needed for all the rework. Kinsley’s Project Manager, John Diehl, said after it was all resolved, that the way our team handled that situation is why he enjoys working with Smucker Company.

Another unusual thing about this project was that all the construction was being done on the finished floor. The poured concrete floor that was put in place at the start of the project would become a polished concrete finished floor. While that is common, typically the floor would be protected and/or covered during construction. Because of the size of the project, a decision was made that it would be easier to have all the trades working on the site take extra care not to damage the floor. While this sounds simple, it actually is very difficult. We were not allowed to drop materials or tools on the floor because it might leave marks. After a very stressful and trying adjustment period, our workers adapted to these demands and we were able to finish the project with very little damage being done to the floor.

When our team finished this project, we reflected on what was a very interesting combination of challenges that we had to overcome…the self-induced schedule issues with the FRP, the issue with working on the finished floor, the level of quality and detail needed with some of the feature products, the large change order in the middle of the project with the tiered seating. We look back on this project knowing that no matter what comes at us, we can still produce a high quality, incredible project that gives the Owner and GC exactly what they contracted us to do. That is why this project should win an award.